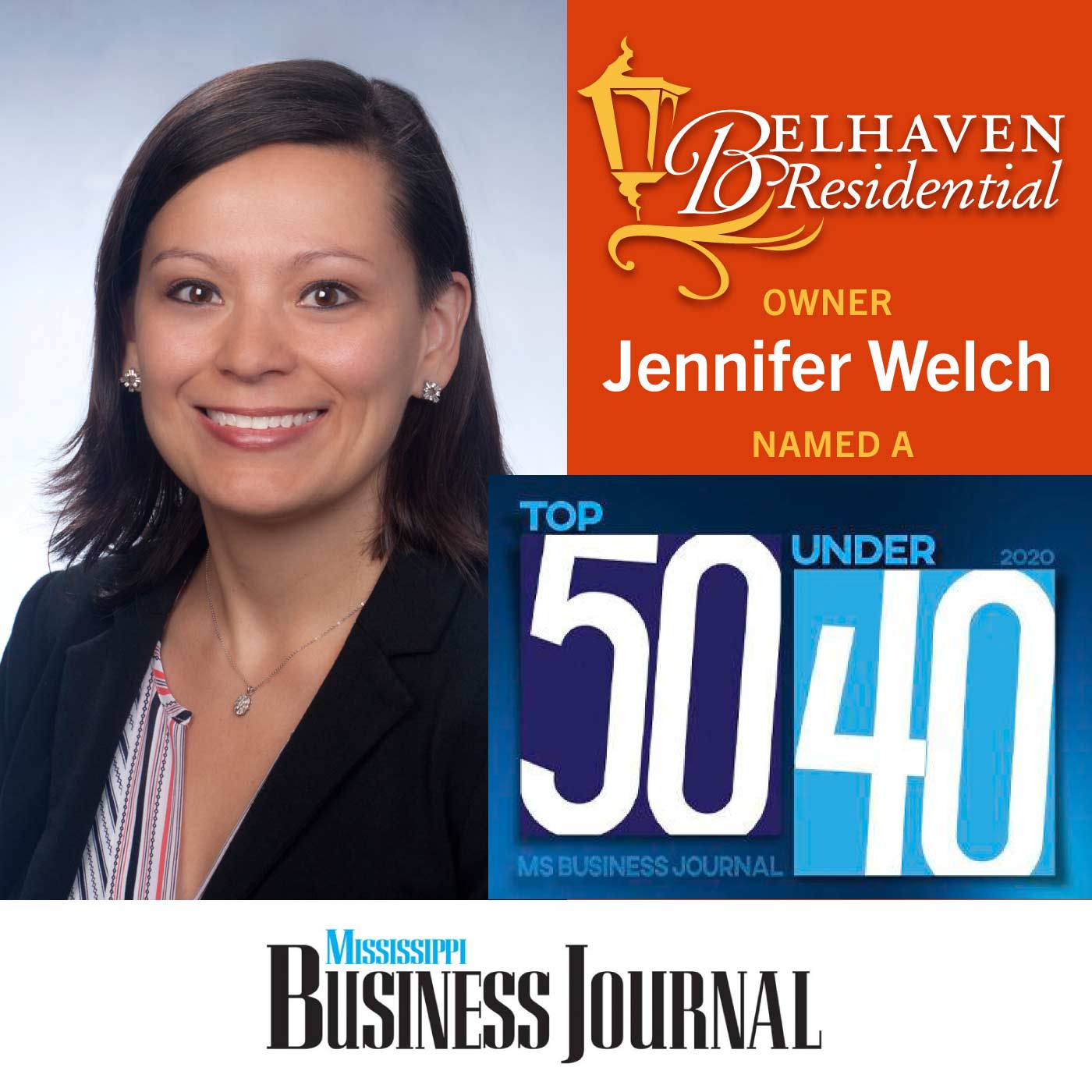 Jennifer Welch is on a mission to create high-quality places for people to live. As the owner of Belhaven Residential in Jackson and Redbud Village in Meridian, she has built two local property management companies that invest in the long-term value of the residences and their surrounding neighborhoods.

The Mississippi Business Journal has named Welch one of its 50 Under 40 for 2020, awarded to individuals who have made significant contributions to Mississippi’s overall economic progress and play active day-to-day roles in moving the state’s economy into the 21st century.

The honor follows on the heels of a 2020 Distinguished Service Award from Mississippi Heritage Trust, who called Welch “a leading light in the revitalization of the Belhaven Heights neighborhood of Jackson,” and the Jackson Free Press naming Welch as a 2020 Young Influential.

“We are truly pleased to recognize and honor a great group of Mississippi’s business and civic leaders under 40,” said Tami Jones, publisher of the Mississippi Business Journal. “These deserving men and women have already proven themselves as high achievers and trend setters, and we have no doubt that many of these individuals will go on to even greater success in the years to come.”

Read the Mississippi Business Journal’s press release and watch the video presentation (Welch is named at 3:29) to recognize the honorees.

From a young age, Welch began gaining experience that would influence her career in property ownership and management. Caring for her five younger siblings taught her early leadership skills. Her first job, at 14, was as a hostess at Little Tokyo, where her strict Japanese grandmother was the tempura chef. At 19, she sought out opportunities to learn the real estate business on the job, including creating an unpaid internship with local property owner and manager Waddell Nejam that grew into a five-year paid position.

When Welch’s father suffered a stroke in late 2005, he asked her to take over management of more than 200 units that he owned. She was only 24 at the time, challenged with holding her own as a young, female property manager in a male-dominated field.

“I had a hard time initially with people taking me seriously,” she said.

But over time, Welch fostered relationships and built trust with contractors and other industry professionals. She continued her education, receiving the prestigious Coggin Lee Scholarship to complete her M.B.A. at Millsaps College, where she had also earned her B.A. Most of all, she proved herself with a successful track record: To date, Welch has rehabilitated approximately over 150 apartments and 11 houses in Jackson and 60+ in Meridian. In 2016, she served on the founding board of a new local chapter of the Mississippi Apartment Association, and then as President of the Association in 2018.

“The accumulation of 15 years of smaller projects has led to a dramatic change in a neighborhood, the same neighborhood where I choose to live,” said Welch proudly.

Welch and her family live in the historic Greater Belhaven neighborhood where Belhaven Residential is located.

“As a local investor, I not only see my residents daily and interact with them and have the human component, but I’m also keeping their dollar here and reinvesting it back into their neighborhood,” Welch said.

Welch has dramatically renovated many of the properties in Belhaven to give them new life and revitalize the surrounding neighborhood.

“I love watching the transformations of property – including historic restorations,” said Welch. “I believe that it’s really important to restore properties using the existing historic character.”

In 2018, Welch worked with community partners such as Mississippi Heritage Trust to commission Jackson native Douglas Panzone to create a mural on the Belhaven Residential building. The artwork highlights the importance of historic preservation and conservation.

Welch also welcomes modern developments to the neighborhood that add value to the residential quality of life, such as the Belhaven Town Center.

“I think that it’s important to create a dynamic and interesting place where young people want to live. So you can create quality housing for especially young professionals who are budget conscious, but want to live around their favorite restaurants and their favorite coffee shop.”

The core values that Welch learned from her family — quality, service, and integrity — still drive the choices she makes in her business today. She thinks about the long-term improvements she can create in the community by investing thoughtfully now. She builds relationships with core members of the city, with whom she collaborates to complete her real estate projects.

On the planning board for the City of Jackson, for example, she considers zoning applications with both business and residential interests at heart. On the executive committee of the Greater Belhaven Foundation board, she helps beautify the neighborhood and ensure that new developments prioritize historic preservation, character, and charm.

Welch is still influenced by the motto of St Andrew’s Episcopal School, which she attended from K-12: Inveniemus Viam Aut Faciemus.

“It translates to, ‘We will find a way or we will make one.’,” she said. “Focus small, follow through despite the challenges, and never give up.”

Jennifer Welch is the owner of Belhaven Residential in Jackson and Redbud Village in Meridian. She received her B.A. and M.B.A. from Millsaps College. She lives with her family in Belhaven.